Paladin is a beautiful young woman with fair skin and an incredibly voluptuous build. She stands rather tall compared to many other humans and has both large breasts and protruding backside. She also has incredibly long blonde hair with a large bang quiffing to one side with others framing her face.

Paladin undoubtedly wears a white skimpy bikini with a white G-string that is strapped by large white stocking resembling lingerie with two blue and white skirts covering her hips strapping a metallic cross under her abs. Over this, she bears incredibly formal platinum and golden armour including gauntlets, greaves, gloves and high heels. As well as this, she wields an enourmous silver blade with a golden hilt and guard.

Despite Paladin standing tall and having the name of a paladin (an honourable warrior), she has a very submissive personality.

She is in fact a complete closet pervert and gets easily aroused by any situation that revolves around her being "assaulted" sexually. That being explained, she can also be considered masochistic as she thoroughly enjoys sexual harassment given towards her. This includes slime corroding her bikini (exposing her large chest), Fighter saving Paladin by grabbing the latter's panties therefore wedgying her rear-end and crotch, etc. 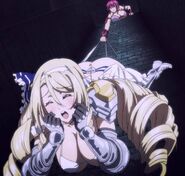