Fighter (ファイター, Faitā?) is the main protagonist of the series Bikini Warriors.

Fighter is a gorgeous young woman with an incredibly voluptuous build. She has a busty chest, identifying muscles (abs and V-line), large buttocks and a proud facial structure. She also has long magenta hair with neck-length bangs framing her face along with having an ahoge sticking upwards from her head.

Fighter arguably is the most revealing of the entire group, bearing only a piggy pink bikini with pale purple straps with the bra latching onto a choke collar. Aside from that, she only has dark-grey wrist and shin bands with their respective guards as "armour".

Befitting her name, Fighter generally gives the expression of many stereotypical fighter/warrior characters in any sort of media. She is a stubborn, short-tempered woman who can get easily impatient through many occasional instances such as Paladin's perverted nature, Mage's timid constitution and Dark Elf's arrogance. 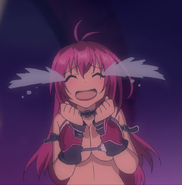 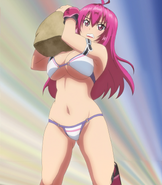